The world we live in is covered mostly in saltwater which is home to some of the coolest marine creatures you’ll ever see.

Some of these creatures live in areas where you will never visit and can only be explored by machinery while others prefer shallow water where people can go and enjoy some time as well. Let’s take a look at some of the coolest looking animals that call ocean waters their home.

This is a cool-looking animal that seems to have feathers for a body. It waves these feathers to get around and live mostly in shallow water. If you see one of these animals, you may become mesmerized by how it moves and what it does to get around in the ocean. They are often brightly colored and very cool to see.

This interesting animal is found in the Indian and tropical western Pacific oceans. This crustacean is colored brightly like candy and shows off with its coloration when it’s moving around. You might think of a shrimp as one of the most docile of marine creatures, but this one is known for its ability to hit with a quick punch at prey with the front two feet. This movement is considered one of the fastest movements in the animal kingdom, which is saying something since it lives underwater.

Think of a grouchy old man or the Grumpy Cat that was all over the internet and you have an idea of what this miserable-looking fish offers for its appearance. This fish lives very deep in the North Pacific and the Bering Sea. This fish might look like it needs to get some exercise, but it actually is very busy. This fish is known to fan its eggs to keep sound out of them, which can be a chore.

This new colorful species is one of the marine creatures that can hide among red algae and sponges to avoid trouble. This fish is located in the area around Australia and was recently found in the Sydney area where it has been hiding for a long time. Considered to be fairly rare, it’s living among many other amazing species in the ocean.

The Frogfish is a type of anglerfish and they blend into their surroundings nearly perfectly. This can be great for hunting prey or hiding from larger fish. These fish resemble sponges and algae-covered rocks to hide in plain sight. Many of these fish walk around on their pectoral fins even though they can swim. This is an interesting way for these fish to move and live, and it seems to work well for them.

These marine creatures can be found in warm, tropical waters from the Caribbean to Indonesia and are something interesting to see. They have tree-like appendages that protrude from their top to give them their name. This top area that looks like a tree is actually the mouth of the worm and the branches push food toward the digestive area of this creature to help it feed more efficiently while attached to rocks underwater.

One of the most colorful eels in the ocean is the Ribbon Eel. This animal lives in the burrows and coral reefs near Indonesian waters. This eel has been found from East Africa to southern Japan, Australia, and French Polynesia. Young versions have black with pale yellow strips around the fins while adults have several bright blue and yellow colors. This is one of the few animals in the world that can change sexes to help the procreation of their species.

This is one of the most terrifying marine creatures found in the ocean. Thankfully, you probably won’t ever run into one because it lives in the tropical and cold-temperature waters around the world and at extreme depths. This fish has the largest teeth of any fish in the ocean, even though the entire fish is typically only six inches long. The only place you may see this fish is when watching deep sea fishing shows. 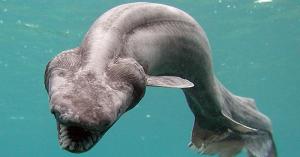 Of course, we should have a shark on this list and the Frilled Shark is one of the most unique that you’ll ever see. This animal looks like it came from ancient times and it certainly does. The roots of this creature date back 80 million years and it can grow to be about seven feet long. The frills are the gills and it swims in a unique pattern, unlike other sharks.

This post may contain affiliate links. Meaning a commission is given should you decide to make a purchase through these links, at no cost to you. All products shown are researched and tested to give an accurate review for you.